Jussara Dos Santos has worked for Kentucky Fried Chicken in Roslindale for four years and said she struggles to make ends meet, never mind being able to put any money aside for college.

When she first heard a strike by fast-word workers would be taking place across the county last week, the Dorchester resident was initially fearful she could be fired. However, she ultimately decided to join about 200 other locals employed at minimum-wage jobs to protest wages and working conditions.

Dos Santos, 20, and the other marchers picketed in Roslindale as part of a nationwide strike organized locally by the activist group, Mass Uniting.

The workers, hoisting English and Spanish language signs in the misty air demanding greater pay and more respect, made their way around the American Legion Highway strip mall in Roslindale that houses McDonald’s, Popeye’s, Dunkin’ Donuts and KFC.

Parents pushing their kids in baby carriages and seniors walking with canes chanted, “Hey, Dunkin’ Donuts, you can’t hide! We can see your greedy side,” as well as, “The people. United. Will never be defeated,” as they made their stand in front of each restaurant.

“People need to hear our voice. … I feel like I’m a hard worker,” said Dos Santos as cars drove by beeping their support.

Standing in the midst of the crowd, Roslindale resident Darrin Howell, deputy director for Mass Uniting in Dorchester, said he hoped the event would prompt improved conditions for locals.

“I hope community members … recognize that these are working individuals trying to provide for their families,” said Howell, 31, who helped organize the demonstration. “We hope to get corporate’s attention.”

After rallying the crowd in front of another fast-food eatery, Howell added, “Hopefully residents recognize … the conditions these workers are exposed to on a daily basis.”

Jennifer Jimenez, who works at the Roslindale plaza’s Dunkin’ Donuts, was soft-spoken but determined as she too expressed her hope for change.

Several area unions also supported the strike and the mission of Mass Uniting, a coalition of neighbors, community groups, faith organizations and labor united in the fight for good jobs, corporate accountability, and stronger communities.

Jason A. Stephany, spokesman for SEIU Local 509 which represents human service workers, reflected that, “What you’re seeing is the growing movement across the nation … that is sending a very clear message (to politicians and the business community) that something needs to be done.”

The former West Roxbury resident who recently moved to Dedham added, “If you’re making $8, $9, $10 an hour … these are workers struggling to make ends meet.”

“With the cost of living in a city like Boston … this is a concern for all working families,” said Stephany.

He added he hopes the strike will prove “we can exact change” by banding together.

“It’s time for us to get back into the business of creating good jobs,” he said.

Stephany noted that there is a ballot initiative for 2014 to raise minimum wage to $10.50 per hour, and secure earned sick time sponsored by the coalition Raise Up Massachusetts. 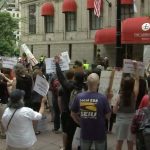 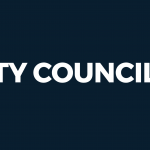